Return to Better: Changes are Afoot 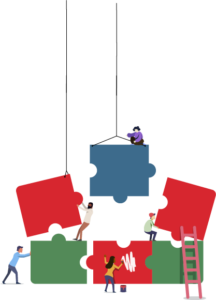 Let’s be honest – how we used to work in the “before times” was neither healthy, sustainable, nor equitable. We all knew there was a better way, but we never had the time nor the bandwidth to think about solutions or alternatives. This enforced intermission allowed us to reset our priorities and re-envision a different way of working. This session was moderated by SMArts board member and head of the production program at National Theatre School, Andrea Lundy. We listened to five very different Canadian perspectives on changes in areas such as working conditions, pay equity, diversity, and sustainability, so when we did return, we returned to better.

ASL interpretation is available. If you require it, please indicate in the order note field when you check out.

We will not go back to normal. Normal never was. Our pre-corona existence was not normal other than we normalized greed, inequity, exhaustion, depletion, extraction, disconnection, confusion, rage, hoarding, hate and lack. We should not long to return, my friends. We are being given the opportunity to stitch a new garment. One that fits all of humanity and nature.

Andrea Lundy
Andrea Lundy is an award-winning Lighting Designer and Production Manager who has worked professionally across Canada and internationally for 33 years. She has been nominated for 22 Dora Mavor Moore Awards and 4 META Awards, and is the recipient of 9 Dora Awards and 2 META for Outstanding Lighting Design. She has worked extensively with the Shaw Festival, Tarragon Theatre, Soulpepper Theatre, Canadian Stage, Necessary Angel Theatre Company, Factory Theatre, Theatre Passe Muraille, Centaur Theatre, National Arts Centre and Geordie Theatre among other Canadian companies. Currently Andrea lives in Montreal and has been the Director of the Production Design and Technical Arts Program at the National Theatre School of Canada for 10 years.

Ian Garrett (York University)
Ian Garrett is designer, producer, educator, and researcher in the field of sustainability in arts and culture. He is the director of the Centre for Sustainable Practice in the Arts; Associate Professor of Ecological Design for Performance at York University; and Producer for Toasterlab. He maintains a design practice focused on ecology, technology and scenography. Through Toasterlab’s Mixed Reality Performance Atelier, recent work includes The Stranger 2.0 with DLT Experience; Groundworks with Rulan Tangen and collaborating artists from Pomo, Wappo, and Ohlone communities; The locative audio project TrailOff with Philadelphia’s Swim Pony; and Transmission (FuturePlay/Edinburgh and Future of Storytelling Festival/New York). Notable projects include the set and energy systems for Zata Omm’s Vox:Lumen at the Harbourfront Centre and Crimson Collective’s Ascension, a solar 150’ wide crane at Coachella. With Chantal Bilodeau, he co-directs the Climate Change Theatre Action. His writing includes Arts, the Environment, and Sustainability for Americans for the Arts; The Carbon Footprint of Theatrical Production in Readings in Performance and Ecology, and Theatre is No Place for a Plant in Landing Stages from the Ashden Directory. He serves on the Board of Directors for Associated Designers of Canada. He was the Curator for the US for the 2019 Prague Quadrennial, and is co-chair for World Stage Design 2021 in Calgary.

Kimberly Purtell (IATSE Local ADC 659)
Kimberly has served on the Board of Associated Designers of Canada (now IATSE Local ADC 659) for the past 8 years. She has served as the Vice President for the past 5 years. She is a Toronto based lighting designer for theatre, opera and dance. Her designs have been critically acclaimed across Canada, the United States, the United Kingdom, Prague, China, Hong Kong, Taiwan, Moscow and Mongolia. She has designed for the Stratford Festival, Shaw Festival, Arena Stage, Washington DC, Canadian Stage Company, Soulpepper Theatre, Mirvish Productions, National Arts Centre and the National Arts Centre Orchestra, Pacific Opera Victoria, Opera Philadelphia, Tapestry Opera, Hamilton Opera, Edmonton Opera, Royal Conservatory of Music, Theatre Calgary, Manitoba Theatre Centre, Citadel Theatre, Usine C, Segal Centre, The Banff Centre, Place des Arts among many others. She has also designed productions for the Pan Am Games and the Vancouver and Beijing Cultural Olympiads.

Lisa-Marie DiLiberto (Theatre Direct)
Lisa Marie is the Artistic Director of Theatre Direct, a company dedicated to creating and producing work for young audiences, now in its 44th season. She is the Founder of FIXT POINT Arts and Media and the co-creator of The Tale of a Town – Canada, a multi-year theatre and media project that has toured to every province and territory. Inspired by stories from The Tale of a Town, Lisa Marie co-created and directed the first season of Main Street Ontario an animated series now airing on TVO. Past posts include Playwright-in-Residence at Theatre Passe Muraille, Associate Artistic Director at Jumblies Theatre and Education & Audience Development Coordinator at Canadian Stage. Lisa Marie is on faculty at Centennial College where she teaches Clown and Acting and she holds a Masters of Arts in Theatre and Performance Studies from York University and is currently pursuing her PhD. She is an Artistic Advisor for the National Arts Centre of Canada, a graduate of George Brown Theatre School and École Philippe Gaulier in Paris, France. Lisa Marie is the co-founder of Balancing Act – a national initiative to support artist caregivers in the performing arts. She is an advocate for artist caregivers, a Dora-nominated director, and the proud mom of two wild children.

Ray Hogg (Prime Mover Theatre)
Ray Hogg is an award winning Black theatre artist known for creating and presenting virtuosic, visually stunning, viscerally moving theatre and live performance. He has over 20 years of artistic, educational and leadership experience in the most celebrated opera, dance, and theatre companies around the world. His work as a dancer, actor, master teacher, producer, director, and choreographer has taken him across Europe, The United States, and Canada. He has created for, and performed on, stages as diverse  as Neptune Theatre in the east, The Arts Club Theatre Company in the west and many others in between. He is currently an Associate Artistic Director at Halifax’s Neptune Theatre, Deputy Artistic Director for The Musical Stage Company, and the founding Artistic Director of Prime Mover Theatre Company.  From 2012–2017 Ray served as Artistic Director of Rainbow Stage.

Rebecca Vandevelde (Means of Production)
Rebecca Vandevelde is an arts worker focused on design, production, installation, curation, and management. Rebecca builds and curates spaces, events, and experiments – like Flip the Table and Blanket Fort – with Art is Hard; and works as a freelance lighting designer and production manager. Most recently: lighting/touring for Pandemic x Rumble x Theatre Passe Muraille Take D Milk, Nah?, PM/Producer for ECT Collective x Theatre Centre Residency Here Are The Fragments., PM for Soundstreams x Signal Two Odysseys, lighting for Aluna Solitudes. Rebecca has been working with Means of Production since our first meeting, back in 2018.

The myth and the reality 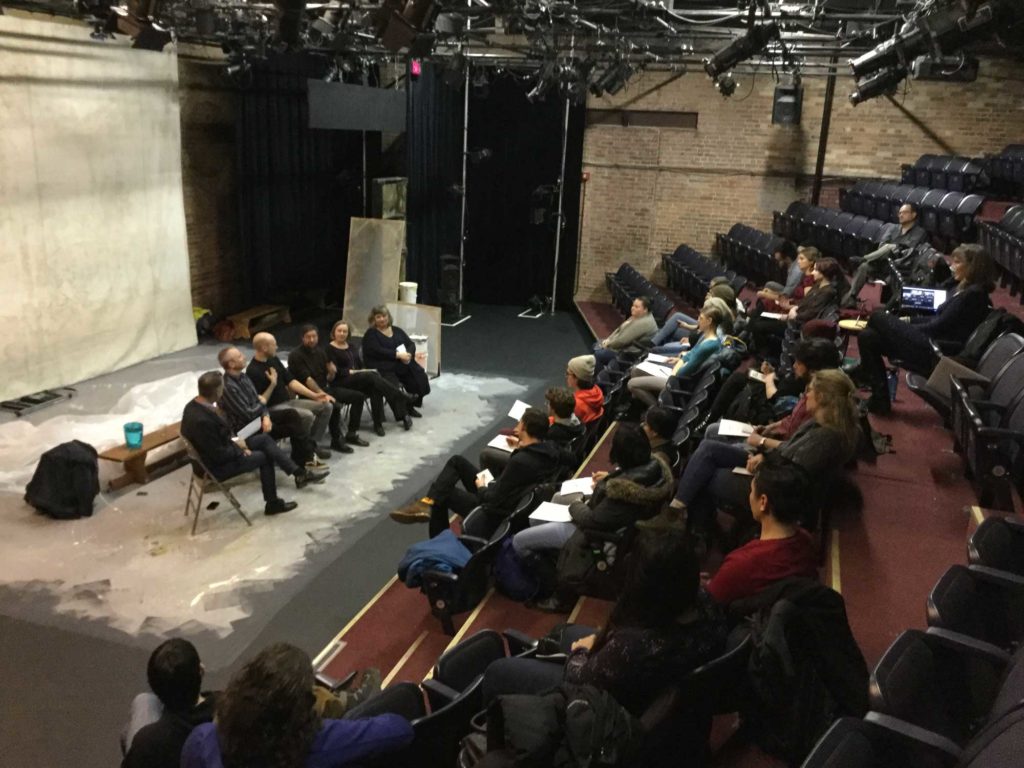 WORK – LIFE – BALANCE…How can 3 words cause such yearning and longing, frustration and determination? In this passion-driven industry is this something you are striving to attain or does it seem like an overly lofty goal? Work Life balance is possible – it is not a rainbow-striped unicorn. There are people in our industry who have come up with some wonderful life hacks that work for them in order to balance these two bickering lovers.  Moderator, Rick Banville spoke with a panel of PMs, TDs and SMs who are attempting concrete solutions. These were personal strategies that work on a global stage and work strategies that were bound by specific company policies. They may not have achieved perfection but they are making the effort.

In order to make this a national discussion, we provided remote access seats through our ZOOM Video conferencing platform.

After the event, we moved to Betty’s for networking and continued informal discussions.

Thank you Canadian Stage for arranging the venue for the event.

Rick Banville – Moderator
Rick has been a Production Manager for over twenty years, working alongside some of Canada’s leading artists and companies while having the great fortune of touring theatre, opera, dance and music through Europe, Asia, Africa, the Middle East, the United States, and Canada. Rick has managed the production departments for The Blyth Festival, Opera Atelier, The Stratford Summer Music Festival, Volcano, Bluewater Summer Playhouse, Opera Lyra Ottawa and most recently, Young People’s Theatre. He has helped to produce annual conferences for CAPACOA, IAMA and ISPA. In 2017, Rick was proud to production manage Luminato’s opening event Tributaries, a celebration of the immeasurable power, passion, beauty, and resilience of Indigenous women. Currently, Rick freelances on the occasional project, consults on others, and teaches Production Management at Ryerson University, Humber College and the National Theatre School in Montreal as well as a course on international touring at NTS. He lives with his family in Hamilton and is a founding member of #hamont’s newest professional theatre company, Industry.

Jessica Severin – Panelist
Jessica Severin is a Toronto-based Stage Manager, and a graduate of the Faculty of Music, University of Toronto. Over the past 15 years she has worked across the country and internationally, for companies such as Mirvish Productions, Vancouver Opera, the Canadian Opera Company, Opera Atelier, Glimmerglass, the Royal Opera Versailles, Luminato, Musical Stage Company, Soulpepper, Obsidian, Nightwood, Tarragon, Ross Petty Productions, the Thousand Islands Playhouse, Drayton Entertainment, Harold Green Jewish Theatre and others.

Erin Fitzgerald – Panelist
Erin is an avid hiker, traveller, gardener, reader, and perpetual student who has a home yoga practice that provides hours of entertainment/confusion for her dog, Daisy. Happily married, honoured to be a stepmom and thrilled to be a part of this discussion on work/life balance, Erin is a Toronto-based stage manager who has had the opportunity to work, live & play tourist in many theatre towns throughout the country.

Barney Bayliss – Panelist
Barney studied film and photography at Ryerson in the early 80s, worked on movies until ’91 when he started managing the scene shop of the Canadian Opera Company. Over twenty-four years at the COC, he went from Shop Supervisor to Associate Technical Director. In 2016 he took the position of Technical Director at the National Ballet of Canada, and has recently taken the role of Interim Director of Production.

Adrien Whan – Panellist
Adrien has been working professionally as a technical artist for the past 30 years. 22 of them were spent at Buddies In Bad Times Theatre, where Adrien started as a House Technician and then moved into the role of Technical Director. Just recently Adrien has left Buddies and is now the AV Manager at the Gladstone Hotel. He is currently still acting as the Touring Technical Director for Buddies.